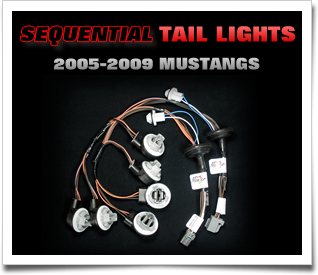 This page was only added to our website in April, 2014.  Previous testimonies did not transfer as hoped, so please don’t let  the fact that there are not yet hundreds of reviews be a negative.  The written reviews are followed by videos submitted by customers.

Posting images with a review is optional and is a new option.  Our system places a default image to fill the void if a review does not have an image.

After getting these, which only took 2 days, I got them installed in about 30-40 minutes. Then I stood back and watch them work in my driveway and I'm thinking, this is soooooooo what all Mustangs need. The 3 taillight design of the Mustang screams for this. I think Ford finally saw what I witnessed and added them to 2010 Mustangs as standard. Love them.

My boyfriend told me he wanted these for his birthday. I don't know much about them but he gave me the link and I bought them. After seeing his reaction once he put them on his Mustang, I don't think I could have gotten anything better. Thanks.

Installed on girl friends mustang and she absolutely loves them. Great price for harnesses but reward from girl friend, priceless!